So who is this person that spends his time coming up with a xylophone that can play music by itself?

My name is John Miller, and I live with my wife and four children in Eden Prairie, Minnesota.  I work as an electrical and controls engineer in the data center cooling industry.  Previously I held positions as a controls engineer in a refinery and in technology development in industrial automation (where I was inventor on 31 patents).  I have a bachelors degree in mechanical engineering, and a masters in electrical engineering, both from the University of Minnesota.

I’ve been interested in music for a long time.  I took 7 years of piano lessons when I was a kid, and played trombone in high school and college band.  These were both enjoyable, although I never got good enough where I would consider myself a solo performer.  When I listen to music, I like trying to identify as many different instruments as I can. 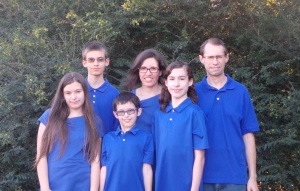 I also have interest in bicycling, wood-working, computers, and electronics.  I have enjoyed microcontrollers ever since I was first introduced to the BASIC Stamp during my Senior Robot Design Project in college.  I like creating and innovating, and get enjoyment in doing things that are different from what everyone else does.  I like to see things that I do be enjoyed by others.  Put all of this together, and perhaps it is not all that surprising that I would decide to make a musical instrument that can play itslef.  (See the Backgound page for the history and details of how I developed this idea.)

So why am I doing this?  Am I expecting to become the next Bill Gates or Steve Jobs?  No.  In perspective, there are probably not all that many other people out there who would want to build a xylophone like this for themselves.  I’m doing this because I enjoy it, and because it has been very technically rewarding.  I’ve probably felt more technical satisfaction in this project, than in much of what I have done in my “paid work” as an engineer.  I keep doing it because of the wide eyes and jaw dropping that I see from people every time I show them this device for the first time.

Through this website, I’d like to extend the enjoyment of this project beyond my own circle of family and friends, and share the project with the world of cyber-space.  I’d hope that there would be others out there who would have as much fun doing this project as I have.  Perhaps there may be some young person who gets inspired to pursue a STEM career.  If you enjoy what you see here, please make sure to “Like” my page on Facebook.

Finally, check out my other do-it-yourself Arduino project, the Toastmasters Automatic Timing Light.